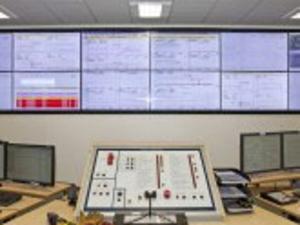 Established in 2001 it took over the administration and operation of the Norwegian pipelines to Europe and employs in excess of 300 workers. Since October 2006, gas has been brought into the UK direct from the Norwegian Orman Lange gas field via the Langeled pipeline, the world's longest subsea pipeline owned and managed by Gassco.

Gassco needed to draw on the expertise of Paragon Data Services in order to create a monitoring system that not only provides maximum visibility of the plant, but enables them to react to issues as they arise.

Paragon Data Services beat off national competition for the deal and from the initial brief with the customer it was clear that safety was paramount to this installation. It was therefore vital that we were able to ensure that Gassco could guarantee safety and efficiency around the clock.

Gas can be a dangerous commodity if it isn’t handled correctly, so by installing CCTV across their control centre at Langeled Receiving Facility in Easington, monitoring what was going on throughout the process could be made easier, thereby increasing all-round safety.

But it's not just the issues of safety and efficiency that were important in Gassco's decision to upgrade the technology in their fast-response control room, with future-proofing the equipment being used also a significant consideration. And that is where PDS came in.

The backbone of the £150,000 installation was a bank of fourteen 60” LED display screens that provided a fully integrated interactive digital display solution with Datapath server and fourteen 60” screens – system integrated with our tailored onsite process control - CCTV Access Control.

This means the clients could individually have separate displays as well as collectively offering a full viewing system comprising off all monitors. This enables the client to have a bigger picture of a particular area, if required, or to bring up multiple display areas.

Also, by implementing this style of video wall, it enables the client to add or develop it in future, if needed - something that was crucial to the ongoing success of the organisation. Not only is the equipment state-of-the-art, but it also has a lower heat and power output and a lower cost of life, giving it the bonus of making it environmentally friendly too.

PDS managing director Iain Bland said: "I am pleased that, by introducing our highly-specialised equipment, Gassco can feel confident that they have the best technology to monitor safety and efficiency 24/7".

“The installation of the display screen technology from PDS is crucial to optimising our output as well as allowing us to give the high-speed response required to issues as they arise. From an initial brief PDS developed an outstanding system that exceeded our expectations and went well beyond what we even knew was possible; not only that - they designed it so it could be developed further in the future, if necessary.” - Ian Livingston, Gassco operations manager

← Back to Case Studies

Official Partner and Sponsors of...